The Intelligent Cities Challenge (ICC) city of Bistrita (Romania)’s ‘The Story of Wine in the Passages of Bistrita’ event which took place in August 2021 is a quintessential example of how an idea on a carefully crafted concept map developed as part of the ICC journey can turn into successful reality.

The Romanian city hosted a four-day event that combined different forms of cultural traditions and activities in and around its historic passages on between 19 to 22 August.

Tourists and locals alike flocked to attend guided tours through the infamous Guild Axis passage, where they were invited to learn about the importance of preserving historical entities. Attendees could also enjoy a variety of craft workshops hosted by local artisans including blacksmiths, carpenters and bakers as well as tune into musical performances and film screenings. Over 30 wine tastings from eight wineries featuring Lechința products attracted the attention of much of the crowds.

One of the event’s missions was to encourage people to view the tourist attractions as less of a checkbox ‘to do’ exercise and more of an immersive experience, through embracing more human interactions and fulfilling cultural experiences. This proposal was made by the Mocănița Transilvaniei Association to celebrate and honour the heritage of the passages and to make them accessible to as many people as possible. The association recognised  the importance of sustainability in tourism and wanted to bring the passages back to life for the ‘The Story of Wine in the Passages of Bistrita’ event so people could enjoy local products, arts and culture in the revitalised area. Posing Bistrita as a small and undiscovered medieval town, event organisers were able to draw in people from nearby municipalities to locations much further away.

Bistrita chose to prioritise sustainable tourism for its ICC project and developed an action plan to serve as a roadmap for the city’s future. After developing the action plan during the ICC City Lab Roadmap session earlier this year, a steering committee was established in May 2021. This committee drafted a tourism concept paper that outlined goals and plans for green and sustainable tourism. One of these goals was to revitalise the Bistrita Passages, specifically the Guild Axis. Therefore, this event was a part of a wider series of plans to prioritise sustainable tourism. 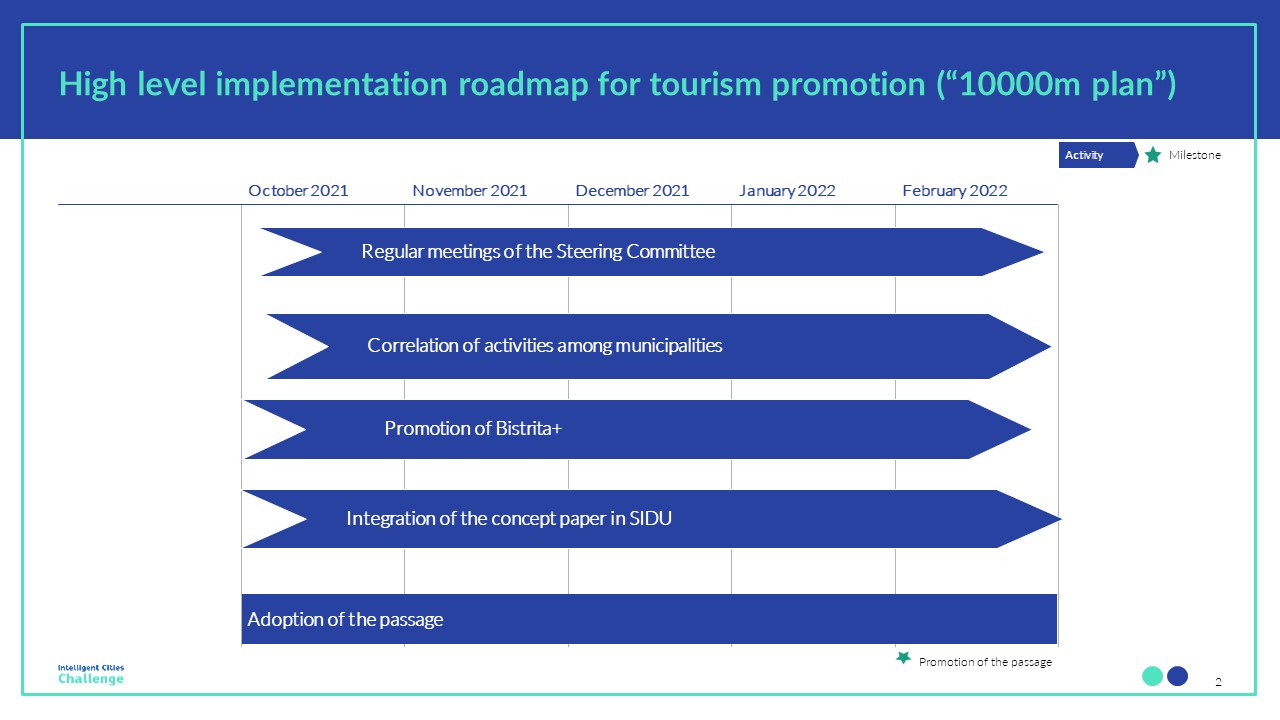 The passage was adopted around mid-July, which means there was only about one month to plan and organise the event. Previously, the passage was damaged and full of graffiti and unpleasant odors, but it was beautified with the help of volunteers.

Since the passage was adopted for five years, plans are set in motion for future events in the area including a half marathon.

The ICC looks forward to seeing how Bistrita continues to use its ICC knowledge to push its smart development.