On 17 March 2021, the Green City Accord marked a key moment with its first signatories meeting. The Accord is an environmental initiative launched by the European Commission in October 2020 to accelerate the implementation of the European Green Deal. It aims at making cities greener, cleaner and healthier by 2030. Joanna Drake, Deputy Director-General at DG Environment recognised that “local governments are essential partners in achieving sustainable urban development and key players in addressing pollution, in managing waste sustainably and in supporting the transition to a Circular Economy.” 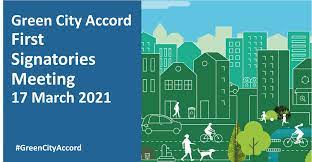 The Accord complements the ICC by setting specific green goals and recognising the important role cities can play in the green transition. Much like ICC, it further acknowledges the shared effort that must be taken by multiple stakeholders working together. The goal is to be more ambitious than the existing minimum requirements in EU laws or standards set out by the World Health Organisation.

Signatory cities will not only set targets and an action plan for 2030 but will also report on their progress every three years. By joining, cities and other stakeholders can benefit from networking and funding opportunities as well as close communication between EU and local policymakers.

The Accord focuses on five key areas of improvement by 2030:

The Green City Accord also provides the possibility to other actors – be it other governmental authorities, businesses, education centres or civil society organisations – to participate in the initiative. They can join to support or mobilise cities in joining or implementing the commitments laid out by the Accord.

Find more information on the Green City Accord here.