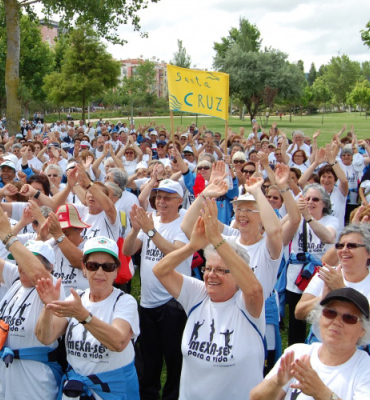 The program “Move for Life - Senior Sport” (in Portuguese "Mexa-se para a Vida"), at the Torres Vedras City Council, consists mainly of physical classes and social events. It aims to promote the improvement of the quality of life of residents above 55 years of age, through the practice of physical activity, creating healthy lifestyle habits and facilitating the existence of positive social contexts. With the interruption of face-to-face activities due to COVID-19, it was necessary to mitigate the lack of physical and socio-affective activity caused by social isolation.

The initiative has two main actions:

Helpline – The nine teachers of the program, make phone calls to the 1900 users weekly, transmitting information about exercises adapted to their conditions and detect any type of needs aggravated by the contingency to which they are subjected. The most serious situations are signaled to the Social Area of the Torres Vedras City Council, which, through a network of partners, tries to solve them.

Video Lessons "Move for Life" – The program's teachers produce video classes with physical exercises directed to the population over 55 years old, whether or not they are users of “Move for Life”. Thus, the general population can take advantage of this initiative. These videos are transmitted on Mondays, Wednesdays and Fridays at 10am through the social networks of the Torres Vedras City Council and can be viewed at any time. In addition to combating a sedentary lifestyle, users can see their teachers with whom they have a strong emotional connection. In parallel, the teachers promote, together with the users' family members, the creation of Whatsapp and Messenger groups to facilitate communication among the elderly, mitigating isolation and increasing digital literacy.

The HelpLine was started as soon as the face-to-face classes were suspended: March 16. The video lessons began to be published on April 20.The team consists of a coordinator and nine teachers. Everyone is working from home. Teachers make phone calls to seniors, manage social media groups and plan and run video lessons. The coordinator articulates the contacts between the team and the Social Area and the Communication Office of the Municipality of Torres Vedras.

To the present date (8 May), 5105 follow-up calls have been made. 34 cases were identified as requiring urgent intervention by social services. Nine video classes have already been published with an average of around 5000 views each class. An opinion and satisfaction survey is currently being released to assess and adapt the intervention in the best possible way. Taking into account the high number of messages and comments of thanks, as well as the feedback collected by teachers by phone calls, everything suggests that the objectives are being achieved