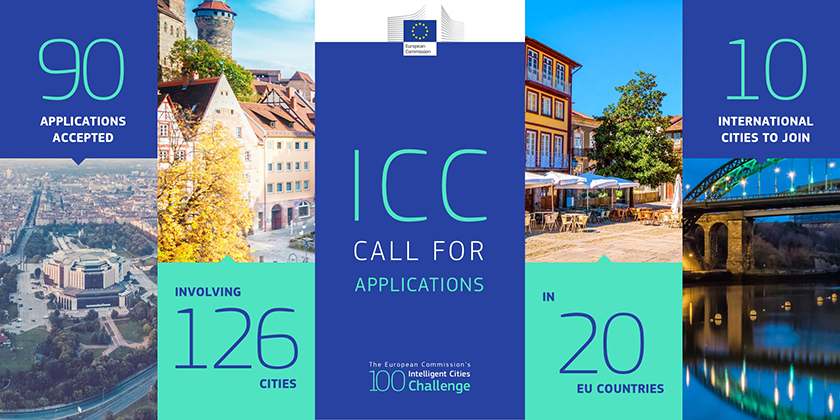 From 27 February to 29 May, the Intelligent Cities Challenge (ICC) received 131 Expressions of Interest from 193 cities in 20 countries in the European Union and the United Kingdom. The European Commission and ICC team were very pleased to see that so many cities are eager to become more sustainable, liveable and socially-responsible by using advanced technologies.

After careful deliberation, 90 applications have now been selected to take part in the Challenge over the next 2 years. This group includes 54 new ICC applications, 26 cities that took part in the Digital Cities Challenge predecessor initiative, and 9 EU mentor cities. We are still selecting 9 international cities to complete the list of the 100 cities that will take part in the ICC journey. Since 8 of the applicants are consortia, including several partner cities, the selected group of cities involves a total of 126 cities.

The selected core cities will receive high-quality and tailored guidance. They will take part in group trainings, learn from peers, participate in a series of high-level events, and collectively plan for large scale change. In doing so, they will leverage advanced technologies to achieve green, smart, sustainable growth. The ICC will kick-start with a launch week scheduled for the week of 28 September.

We are very glad to have the selected cities on board and are extremely grateful to the cities which have shown an interest in joining the ICC. The European Commission and the ICC team look forward to supporting the cities on their intelligent journey.

*one European mentor city is still to be selected.

The following resources have been pooled together by the Intelligent Cities Challenge to help cities navigate the current crisis and implement appropriate responses through learning and the sharing of best practices on effective technology-led interventions from European and global cities.

Shaping the cities of tomorrow

The 100 Intelligent Cities Challenge (ICC) is a unique opportunity for evolving EU cities to join a community that leverages advanced technologies, to tackle the pandemic crisis and reconstruct their economies while steering them in the direction of green smart sustainable growth. This will help cities to improve the quality of life and create new opportunities for their business communities.

The ICC will build on the success of the Digital Cities Challenge, which helped 41 EU cities develop a strategic vision and a roadmap for digital transformation. ICC cities will receive high quality and tailored guidance and expert support, access to advisory and city peer networks (European and international), and capability building tools, to drive priority policy goals and the uptake of advanced technologies.

Through its action oriented and collaborative approach, the ICC will offer cities a unique opportunity to:

ICC builds on the successful Digital Cities Challenge, which saw 41 cities create a vision, strategy and roadmap for their digital transformation